QupZilla is a free and lightweight multiplatform web browser. It allows seamless integration with users' desktop environments and has several distinguishing features positively received by reviewers.

Gwenview is a fast and easy to use image and video viewer. Gwenview features two main modes: Browse and View. Both modes can be used in a normal application window and Full Screen.
Browse Mode lets you navigate through your computer showing thumbnails of your images, View Mode lets you view images one at a time, and Full Screen lets you make quick slideshows. There is also a start screen that displays a list of recently opened folders and URLs as well as your places and tags.
Image loading is handled by the Qt library, so Gwenview supports all image formats your Qt installation supports.
Gwenview correctly displays images with an alpha channel (transparency) as well as animations.
Gwenview supports the displaying and editing of EXIF comments in JPEG images. Lossless JPEG transforms such as rotations and mirroring are also supported. Gwenview can read embedded color profiles from PNG and JPEG files. It can use the image color profile together with the display color profile to output correct colors on the screen. 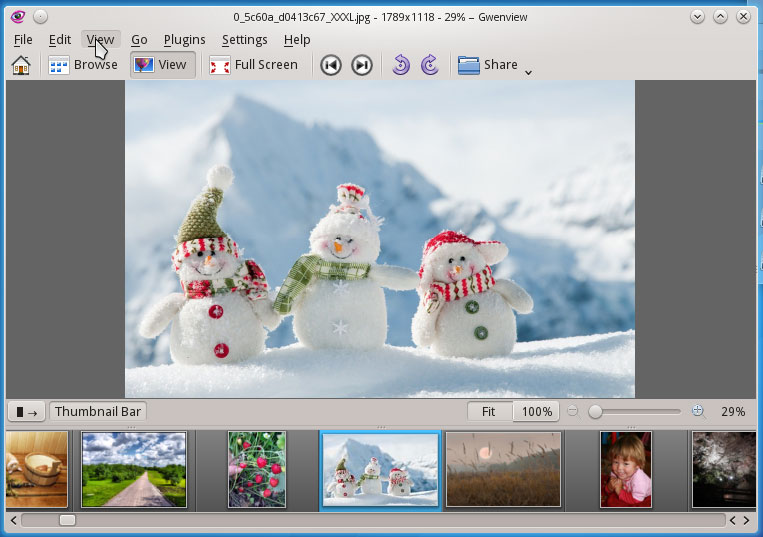 Featuring a simple (like Nero), yet powerful graphical interface, K3b provides various options for burning a CD, DVD, or BD (Blu-ray disc). Various types of optical projects are supported including (but not limited to) audio and data, video projects for DVD and VCD, as well as multi-session and mixed-mode discs. K3b also has the ability to erase re-writeable media and can perform more complicated tasks such as audiovisual encoding and decoding.

KMix supports several platforms and sound drivers.If you have both ALSA and Open Sound System drivers installed, KMix will use the ALSA driver.

Okular is a KDE universal document viewer based on the code of the KPDF application.

This is a text editor for KDE version 4 and above. Some of Kate's many features include configurable syntax highlighting for languages ranging from C and C++ to HTML to bash scripts, the ability to create and maintain projects, a multiple document interface (MDI), and a self-contained terminal emulator. But Kate is more than a programmer's editor. Its ability to open several files at once makes it ideal for editing UNIX®'s many configuration files.

Kompare is a GUI front-end program that enables differences between source files to be viewed and merged. Kompare can be used to compare differences on files or the contents of folders.

System Monitor is the KDE Task and Performance Monitor. It features a client/server architecture that allows monitoring of local as well as remote hosts. The graphical front end uses so-called sensors to retrieve the information it displays. A sensor can return simple values or more complex information like tables. For each type of information, one or more displays are provided. Displays are organized in worksheets that can be saved and loaded independently from each other. So, System Monitor is not only a simple task manager but also a very powerful tool to control large server farms.

Ark is a program for viewing, extracting, creating and modifying archives. Ark can handle various archive formats such as tar, gzip, bzip2, zip, rar, 7zip, xz, rpm, cab and deb (support for certain archive formats depend on the appropriate command-line programs being installed).

KCalc is a calculator for KDE. In the simple mode it can be used for basic arithmetic operations, but provides advanced modes for scientific, statistical and numeral system calculations.

KSnapshot is a simple application for taking screenshots. It is capable of capturing images of the whole desktop, a single window, a section of a window, a selected rectangular region or a freehand region. The images can then be saved in a variety of formats.

KReversi is a simple one player strategy game played against the computer. The playing field is an 8 by 8 square board divided into 64 squares. The game pieces used are two sided stones, where each side has its own, distinctive color. If a piece is captured by an opposing player, that piece is turned over to reveal the color of that player. A winner is declared when one player has more pieces of his own color on the board and there are no more possible moves.

KMines is the classic Minesweeper game. The idea is to uncover all the squares without blowing up any mines. When a mine is blown up, the game is over. Numbers indicate how many mines there are nearby.

The player has to fill a grid with symbols so that each column, row and block on the game board contains only one instance of each symbol. In KSudoku the symbols are usually the numbers 1 to 9, but may be the letters A to P or A to Y in larger puzzles. Puzzles start with the board partially filled and it is your job to fill in the rest.

When you start a game, you can choose from several Sudoku types and sizes. You can then have KSudoku generate a puzzle for you to solve or you can start with an empty board and enter in a puzzle from another source, such as a newspaper, then get KSudoku to check it and maybe solve it.

There are many variations of Sudoku in existence and KSudoku provides a good selection of them. The most common variant has a 9x9 square grid and uses Arabic numerals 1 to 9 as symbols. The grid has 9 rows and 9 columns and is divided into 9 blocks of 3x3 squares. The problem is – each symbol can only be used once per row, column or block.

Note: It takes time and concentration to complete a game. However, solving Sudoku puzzles helps to increase overall brain activity and therefore is highly recommended.